Crowdified! This project has been successfully funded on 20. December 2021. Thanks to the 519 boosters that made it possible!

Support the fight for the recognition of non binary people

Support Transgender Network Switzerland in fighting for the legal recognition of non binary people. For two years we have been leading a crucial case, which is now before the Federal Supreme Court: A gender marker that was “deleted” in Germany is to be recognized under Swiss law. Accompanying this, we want to increase non binary visibility in the media and awareness among politicians. Help us to cover the costs for lawyers, courts, and our work! 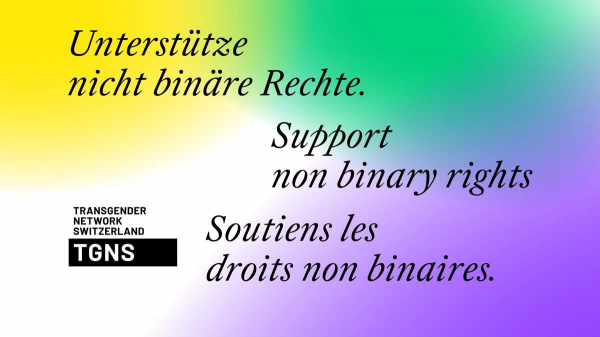 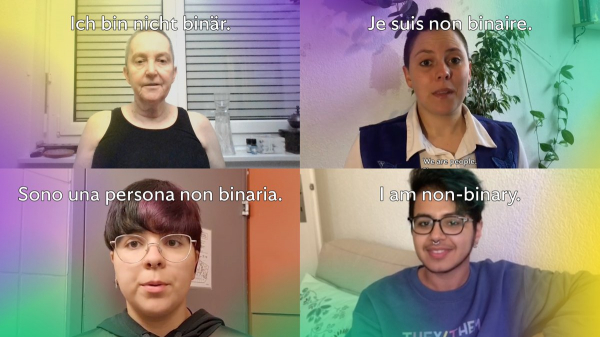 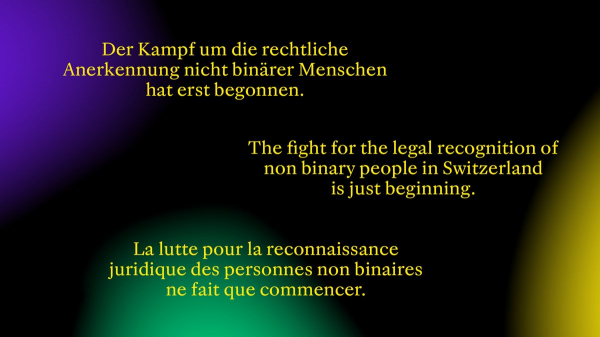 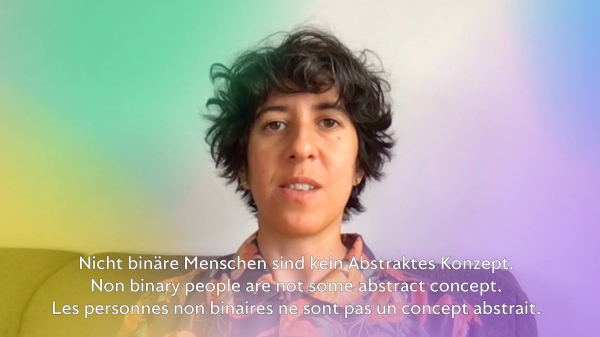 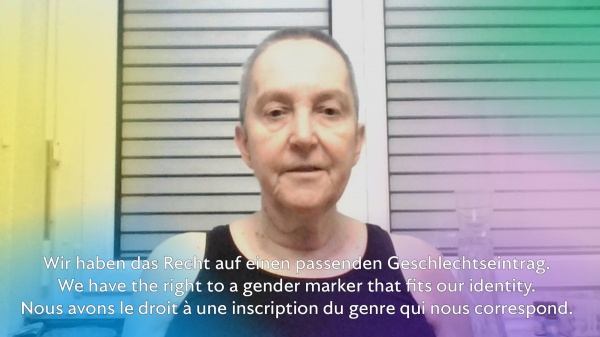 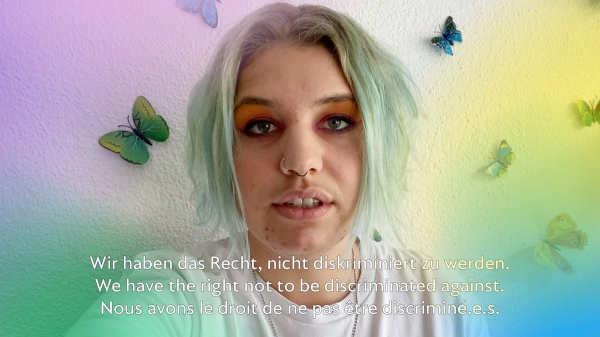 What is this crowdfunding about?

On March 29, a historic ruling was made by the cantonal court of appeal in Aargau, Switzerland. The deleted gender marker of a nonbinary person in Germany was to be recognized in Switzerland and adjusted accordingly in both the person’s Swiss civil status register and birth register. The ruling symbolized a ray of hope for many non binary people in Switzerland. Marking an important step towards a gender marker option beyond F and M. Yet, an appeal was filed by the federal administration against this ruling. Now, the Federal Supreme Court could reverse the decision made by the cantonal court in Aargau.

We don’t know how the Federal Supreme Court will decide, nor when the verdict will come. Yet, we do know that the fight for the social and legal recognition of non binary people in Switzerland is just beginning. And we know that this fight also comes with its costs. For this, we now need the support of many, including you!

This is a lot. But there is also still a lot to do.
Together we can reach that amount!

–
Further information (in German, French & Italian): www.tgns.ch
[Image: Excerpt from the verdict by the cantonal court of appeal in Aargau, dated March 29, 2021.] 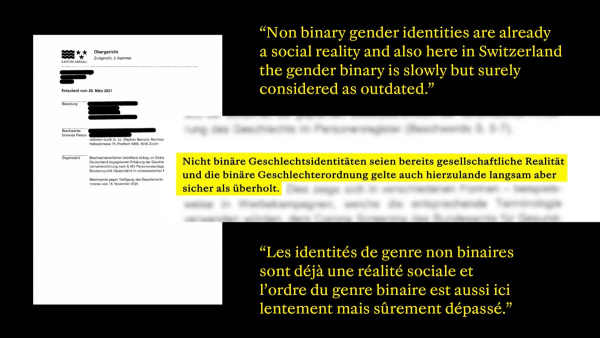 What is our goal amount and what are these funds needed for?

15,000 CHF
​​If we reach this first stage, we will be able to cover already incurred legal fees and court costs for the case in front of the cantonal court of appeal in Aargau up to the Federal Supreme Court.

30,000 CHF
If we manage to reach this second goal, we will now have the means to respond to the Federal Supreme Court’s ruling—regardless of its outcome.

Because if the Federal Supreme Court does not approve the recognition of the deleted gender entry, the case could be brought in front of the European Court of Human Rights in Strasbourg. This would entail further costs. And if the ruling is positive, we would use this amount to step up efforts in educating the public about the lived realities and needs of non binary people.

45,000 CHF
Should we reach this third and final goal, we could finance the work that the legal department of TGNS has been investing in the case from Aargau. Since the case was in preparation for several years, it took up an unprecedentedly large amount of resources that have gone beyond the usual scope of TGNS’ legal department. Offsetting these expenses will contribute to the continued financing of the work of TGNS.

If we manage to raise more than 45,000 CHF, any additional money will go to TGNS, allowing the organization to do even more for non binary people. 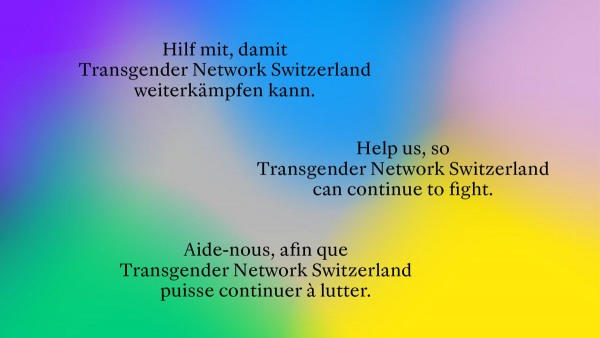 What are non binary gender identities?

In recent years, ”non binary” (also spelled “non-binary” or “nonbinary” by many) has established itself as an umbrella term that unites people who identify as in-between, outside, only partially as, as both, or not at all as male or female. Some also identify as having no gender. And for some, their gender identity is fluid. Non binary people also use other terms—some of them being more nuanced descriptors—such as genderqueer, genderfluid, bigender, pangender, agender, gender nonconforming, etc. What all non binary gender identities have in common is that the existing binary gender system of “woman or man” does not fit or is restrictive.

Based on surveys from other countries, the number of non binary people in Switzerland can be estimated to lie between 103,000 and 154,000 people—about the same number as people living in the city of Bern. 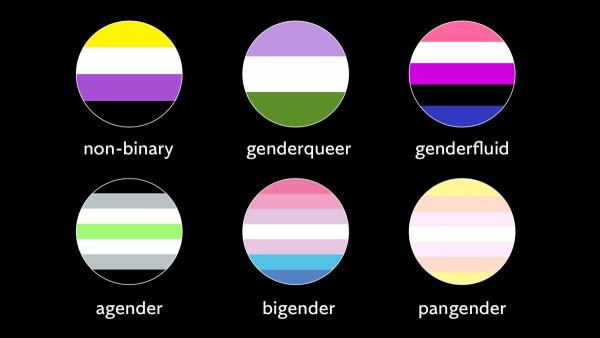 Why is the recognition of non binary people important?

As first studies show, non binary people in Switzerland are more prevalent to suffer from symptoms of depression in comparison to people whose gender identity aligns with the gender binary. One important factor in this is the fact that the gender identity of non binary people is often ignored. This happens in many places, for example, in the private sphere, at work, on forms, in the media, and even at state level. While the struggle for recognition needs to address all of these aspects, the introduction of official gender markers beyond "F" or "M" is a particular concern for non binary people. A 2019 survey by TGNS confirmed just this.

We have seen more and more countries introducing such options in recent years. Germany, for instance, offers the options of either a “deleted” entry or the entry “diverse.” Internationally, “X” is the established non binary gender being used in passports. Such an “X" is offered by an increasing number of countries, including Austria, the USA, Malta, Belgium, Denmark, the Netherlands, and Spain.

Some of these countries have had to introduce such options as a result of rulings by their constitutional courts. These courts have confirmed that non binary people have the same right as everyone else to be recognized by the state. In other words: this recognition is a fundamental human right. We want to see this human right achieve a breakthrough also in Switzerland.

As the cantonal court of appeal of Aargau also acknowledged: Non binary gender identities are “already a social reality.” We are not some abstract concept. We are people.  As such, we have the right to a gender marker that fits our identity. We no longer accept being discriminated against but demand our rights, also from Switzerland.

The verdict by the cantonal court of appeal in Aargau (in German):
www.tgns.ch

A 2019 survey by TGNS on gender marker preferences by non binary people (in German): www.tgns.ch

Estimation of the number of non binary people in Switzerland, included in the report by the National Advisory Commission on Biomedical Ethics (NCE): www.nek-cne.admin.ch

Founded in 2010, Transgender Network Switzerland (TGNS) represents the interests of trans people at the national level. Trans includes all people who do not identify with the gender they were assigned at birth.

Beyond its political work, the association’s mission is to be a network for trans people in Switzerland and local trans organizations, as well as to inform and sensitize both the media and the general public on all issues related to trans identity.

In addition, TGNS accompanies and supports trans people and their relatives on their individual journeys. TGNS is mainly active in Switzerland, but also seeks to maintain strong international connections.

I am non-binary myself. Therefore, I know from my own experience how much we still have to do until non-binary people achieve more recognition in society. Many structures still don’t consider us at all—the law included. But we are people. We deserve respect, acceptance and equal rights just like everyone else. Unfortunately these are things we have to fight for. And this fight also necessitates financial means.

Alecs Recher
Zürich, CH
Support of the Aargau case as head of the TGNS legal department

“All people are equal before the law,” the Federal Constitution states. “Then us non-binary people must be granted the same right to recognition by the state,” I reply. I want to eliminate the injustice that Switzerland is doing to us non-binary people today, and in doing so, I also want to finally get rid of my own gender marker, which has always been a nuisance.

Having identity documents that correspond to one’s gender identity helps to reduce certain forms of discrimination. It is therefore important for Switzerland to recognize this and to adapts its law to include non-binary people.