Crowdified! This project has been successfully funded on 05. January 2020. Thanks to the 46 boosters that made it possible!

Do you dream like us of hearing Balkan music on the stages of the greatest festivals? To finally have something to look at on Youtube? To shout "Opa" at the best dance parties? Tzupati Orchestra needs your support to make its first video clip. It would allow us to reach a wider audience and have access to major stages and festivals around the globe. so all together now: "Opa Cupa"! 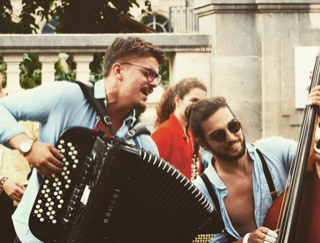 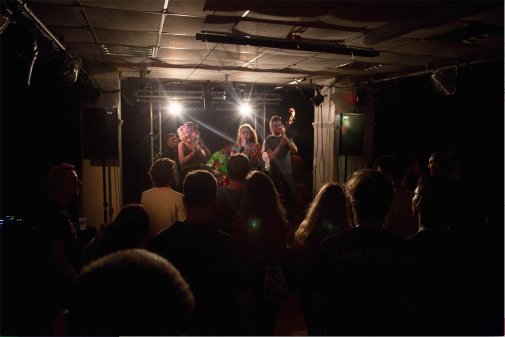 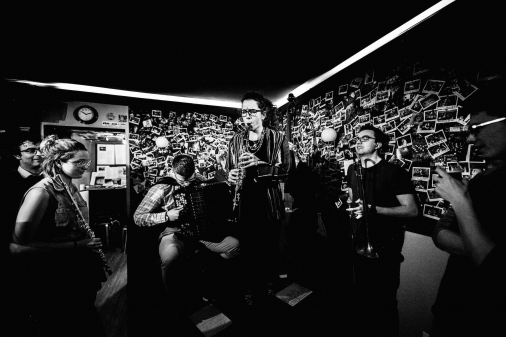 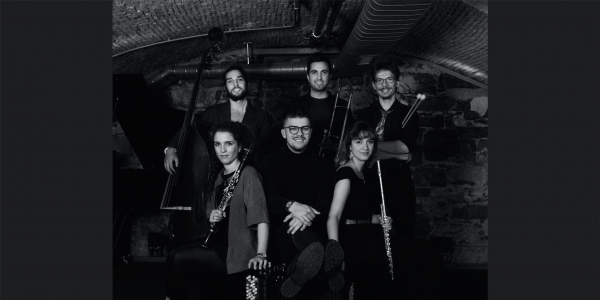 Why we need a video clip

As musicians, sharing is the essence of our profession. Giving concerts and making the audience dream is part of our daily lives.

Today, the music business is changing and performances are now being monitored on our screens. A band now needs content on the web to exist for both the audience and booking agents.

We play music that is ageless. It has evolved over the centuries with its audience. It is by nature universal and needs to finally arrive on our screens today.

The band celebrated its 25 concerts and yet, finding concerts without audio-visual support is still a huge uphill battle.

At each concert, generations mix and young people discover this music. Sadly it is almost completely absent on the Internet.
We would be honored to be able to participate in maintaining this heritage.

The Swiss Balkan music scene is very small. Promoting this music is our responsibility to keep it alive.

We plan to work with a Swiss company specializing in video clip production: LYGHT. We seek to produce excellent quality material for our loyal audience. 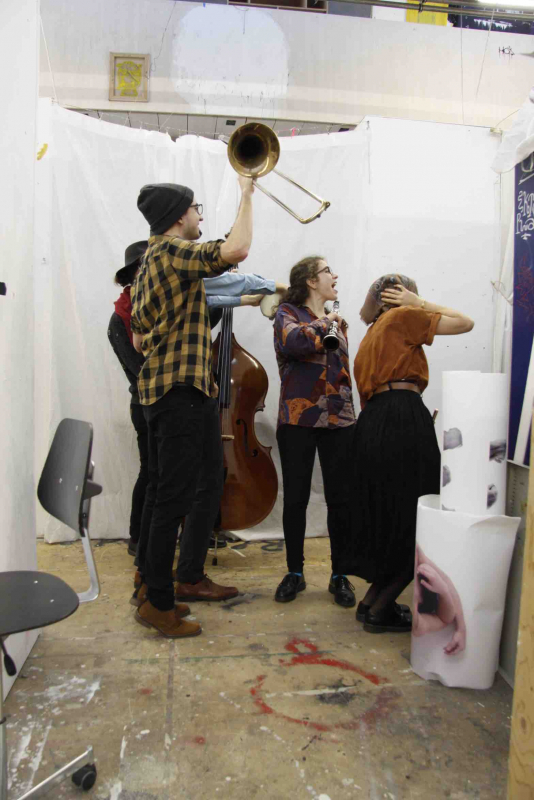 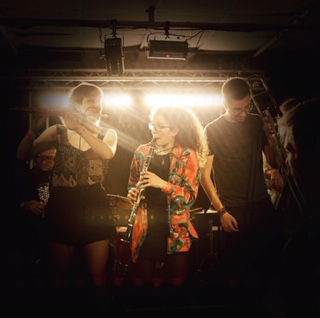 After a year of activity, we feel the need to professionalize our image so that it reflects our daily work and our desire to offer a very high quality of music. As aspiring professional musicians, we are aware of the importance of a quality presentation/promotion. It is therefore becoming urgent to improve the quality of the audiovisual media we produce. Our next objective is to record a number of songs in a professional studio accompanied by video shoots (clip, teaser, advertising...).
This would allow our group to reach a wider audience and professionalize our image. It will become easier to approach larger and better venues.
We are already active on social networks. We regularly put up content on our profiles and maintain a reactive and loyal community around concert. Since the creation of the group we have been working mostly in collaboration with various faculties of our school: Sound arts for the realization of audio demos, Fine Arts for photo shoots, Computer science during the creation of our website etc. Our school's cultural agency (KULT Agentur), also provides us with a promotion page on its website.
Tzupati Orchestra is an integral part of our daily lives. Looking for Concerts and making sure everything goes smoothly for the band and the venues completes our weekly schedules, which are already full of our studies.
In less than a year, we have performed more than twenty times throughout Switzerland as well as in neighbouring France and Alsace, suggesting a promising future.
We would like to emphasize that this music is a complementary element to our studies. It allows us to develop abilities that are not necessarily taught to us in class. Classical music students indulge in the joys of improvisation while Jazz students break out of their usual repertoire.
It is also a management experience. Although we are students, this band lets us discover the business of music.
But despite all these obstacles, we are proud of what we have accomplished and look forward to much more.
In our group the barriers have fallen, Serbian, Spanish, Swiss or French, in the jazz or classical field; the enchanting melodies of the East bring bring all of us together.
Our primary objective is to bring this traditional music to life and to bring it to everyone. Few people - and even fewer young people - play traditional music on Swiss stages despite a reactive audience. We want to preserve this music's legacy. 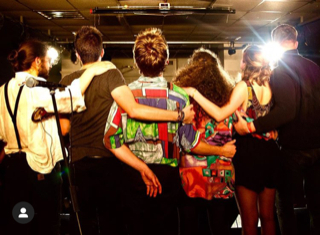 The orchestra is made up of six young musicians studying jazz or classical music at the professional conservatory of Berne (Hochschule der Künste Bern). The instruments in Tzupati Orchestra are the clarinet, the flute, trombone, double bass, accordion and percussion. The school being international, we have among us musicians from all over the world. Each member brings his own traditional background to the music. Multicultural multidisciplinarity is the key to strength and originality of our music. The repertoire includes music from Balkans, Catalonia and Klezmer. We have performed throughout Switzerland at events such as "La fête des Vignerons 2019" in Vevey, a festival that only takes place every 25 years with over 100'000 participants, or in venues such as Mahogany Hall in Bern or the Mehrspur in Zurich. We have also played a lot for bars, restaurants, clubs, festivals or private parties. In addition, each summer we organise a tour in different countries such as France or Spain. Traditional music has the advantage of addressing a very large audience. We've encountered spectators of all ages, from all walks of life, different environments and backgrounds. Let yourself be enchanted by the magic of this music.

Rebecca Minten, born in Basel in 1998, grew up in Geneva in a family half Italian and half German. She started playing music at the age of 7 with the bamboo flute before quickly moving on to the clarinet in René Meyer's class in 2007. She was a member of the intensive course and then pre-college at the Popular Conservatory of music in Geneva. She completed her preparation at university in Vienna, at the Prayner Konservatorium für darstellende Kunst Wien. She likes to perform with different ensembles, orchestras and chamber music within the conservatory and elsewhere. Thus, she plays with the Orchestre du Collège de Genève, the Sinfonietta de Genève, the Orchestre qui Passe par Là, the Prayner Konservatorium Orchester, the Philharmonie der Universität but also in smaller numbers, especially for music contemporary that she loves. After five years in Basel, thirteen in Geneva and one in Vienna, she is a student in the Ernesto Molinari's class at the Hochschule der Künste Bern, where she develops her capacities in classical Bb clarinet but also as bass clarinet. Outside the classical repertoire, she has in recent years explored the music industry of balkan and gypsy and is a fan of jazz.

22-year-old Ludmilla Mercier is a flutist of Genevan origin.

the Jacques Dalcroz Institute in Geneva. At the age of 7, she took flute lessons crossover in intensive courses at the public music conservatory in Geneva. In 2014, she joined the pre-professional sector of the school for 4 years. She met professional musicians of the Geneva community very early on and had the opportunity to play several times with well-known artists, such as Sarah Rumer, the first flutist of the orchestra of the Suisse-Romande. At the same time she studied singing, piano and dance at the Geneva Conservatory. She attended the music department at College De Saussure. At the age of 19, the young flutist started at the Bern University of the Arts as a part of Christian Stüdler’s class. Since then, her passion to share art with her public brings her to share many chamber, orchestra, and jazz music projects with everyone.

Rebecca Minten and Ludmilla Mercier are responsible for all the administrative aspects of this project. Booking, accounting, communication and planning...Together, they decided to launch this crowdfunding to help promote their group on a larger scale.

Born in 1994 in the city of Calp, Spain, Pere Molines is a trombonist working in Switzerland. He began to play music from an early age, mostly playing in the different brass bands in his city and the surrounding villages. At the age of eight, he began his studies at Professional Conservatory José Pérez Barcelo in Benidorm and in 2012, he starts his studies of classical music at the Conservatory Music Superior Oscar Espla, in Alicante. During this period, he had the opportunity to study with different teachers and to attend master classes given by famous international teachers. At the end of his studies, he decides to specialize in Jazz and ensemble conducting. From 2012 to 2018, in parallel with his studies, he was teaching trombone, musical language and conducting for young musician orchestras at the schools of

music by Calp, Castell de Castells and Nucia. Today, Pere Molines continues his studies in Switzerland. He is studying trombone in Jazz specialization at the Bern University of Arts.

Dejan Skundric is a Serbian accordion player. Since a very young age he participated in several national and international competitions. When he was ten, he won the International Accordion Competition in Pula and was called "most promising talent" of the competition. In 2008, 2010 and 2014, the Autonomous Province of Vojvodina awarded him for his musical talent. He is also a winner of the Bundessiegespreises - Young Talent Fund - in 2014 and 2018. Since 2017, he has been studying at the Bern University of the Arts with Teodoro Anzelotti. Since his time in Switzerland he participated in several events such as the Lucerne Festival Academy - a master school for new music. But Dejan doesn't forget the music of his own country and continues to improvise on Serbian themes that he "plays with passion," combining classical accordion with Balkan music.

Born in 1997 in Neuchâtel, Ulysse Loup is a electric bassist and double bassist in the Swiss jazz scene.

As a son of two actors, he was exposed to the performance arts at a very early age. At the age of ten he received his first musical education at l'Ecole de Pratique Instrumental in Geneva. At fifteen he entered the pre-college at the Conservatoire Populaire de musique-AMR, where he studied bass, harmony, rhythm, solfege, ensemble playing and attended masterclasses given by world-renowned musicians. During this time, he started to perform in the Geneva jazz scene and experimented with playing in different styles in many different occasions. In 2018, he was chosen to represent his school at the Cortona Jazz Festival in Italy.

Ulysse currently lives in Bern where he continues his studies at the Bern University of the Arts. He performs not only throughout Switzerland, but all of Europe. Besides being a versatile musician, playing music from the Balkans to free jazz, he also works with actors in music-theatre crossovers.

Born in 1996, in Geneva, Corentin Barro began his percussion studies with Nicolas Curti. He then entered the conservatory of Geneva (CMG) and in the Pre- professional program with Damien Darioli. In 2015, he began his Bachelors degree at the Bern University of Arts with Jochen Schorer, Christian Hartmann and Brian Archinal. He obtained his Bachelors degree in June 2019 with high ratings from the jury. He is currently pursuing his Master in Creative Practice, specializing in sound creation, Théâtre Musical and contemporary repertoire with Brian Archinal. During his studies, he created the project "Romanesco duo," which focuses on the contemporary repertoire, Théâtre Musical and Duo Membrane, a mixture of sound and movement with the dancer Laura Dicembrino. Parallel to his classical percussion training, he takes part in various projects as a drummer: Octante-et-Onze (jazz, Bern), Le Cube Jaune (disco, techno, Geneva), Concrete washing (klezmer, Balkan, Geneva) and Tzupati Orchestra (Balkan, gypsy, Bern).