Crowdified! This project has been successfully funded on 19. December 2014. Thanks to the 84 boosters that made it possible!

of Roots and Wings

a documentary in Search of Home

hello hello!
it’s already the 28th again and I send you our latest update!

As you know we started editing our movie in early February. It was a very emotional week for me. It was filled with many great memories that flared-up. The shootings that happend almost one year ago, were totally diverse and while we immersed in the footage we were suddenly back with Frøviks at the Fijord, with Rainer at archery in the park, with Kjersti in the dance studio, with Glayds on the night walk through Berlin, with KaDe on the houseboat, with Nicky in the crowded Mauerpark and with Ellenbergers under the big old linden tree in the Emmental.
Beautiful pictures - they refresh heart and soul after the gray winter weeks. As different the locations were - one thing remained the same. It was always super exciting to be able to delve into the story of our protagonists ..
And that's it what probably gave me a headache in this first week editing. This uncertainty whether we'll make it possible to bring these stories alive on the screen.
But we talked a lot about the film and the individual elements and it has helped me to get a feeling for the film. And so I arrived back in Switzerland with a good feeling. Because even if we haven’t come so far, as I thought we would, I can feel the film. There is life in these pictures and truth in their stories! You'll see! :)

By the way, the last time someone asked who would have made the film music. It was Patrick. masslevel.com
Write us if you have any questions! info@von-Wurzeln-und-Fluegeln.ch

In the end of March I'll be back in Berlin for a week. From there you will get the next update.
Love,
Marielle & Co.

Of roots and wings – a documentary in search of home
http://www.of-roots-and-wings 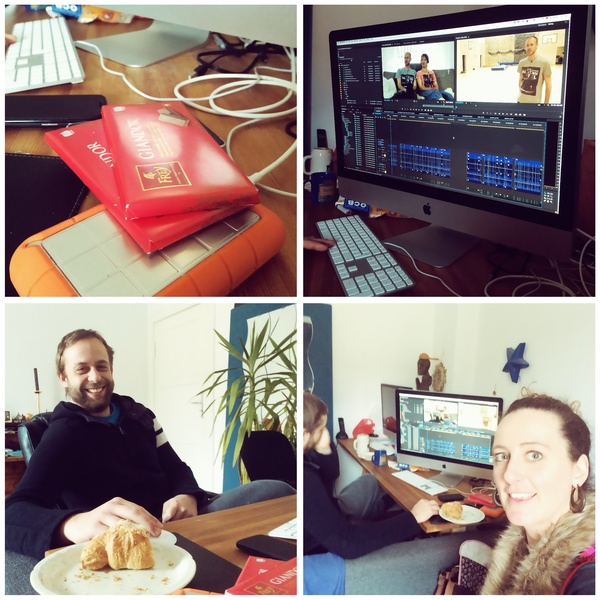