Voting experiment on introduction of tax in Switzerland

I want to analyse the factors that lead to an approving/opposing stance on an air travel tax among the Swiss population. This is possible thanks to the conjoint analysis method. Unlike previous, more conventional surveys done on the topic, it can capture the multidimensionality of such a tax and provide more significant and meaningful insights. The findings can be of great value for the futute design process of an air travel tax policy. 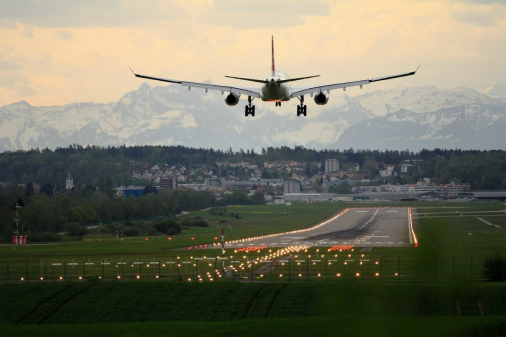 At its core, the master's thesis tackles the potential introduction of an air travel tax in Switzerland. I am convinced that the subject enjoys great political relevance. Since the rejection of the CO2 act in June 2021, there has been virtually no debate on an air travel tax in Switzerland. Many believed - and still believe - that the vote was lost due to the new/increased taxes on fossil fuels. However, this undifferentiated view ignores the likely hypothesis, that voters mainly opposed new/increased taxes on fossil fuels consumed as part of everyday life (heating, driving) and not the new tax on a luxury good such as air travel. Surveys have repeatedly shown that a majority of the Swiss population would, in principle, welcome an air travel tax. Earlier this year, it was even reported that the "Verkehrsclub Schweiz" (eng.: "Swiss Association for Transport and Environment") was working on a popular initiative for such a tax.
I am convinced that an academic paper on the topic can be highly valuable in that it can help reignite a urgently needed political debate on the topic. If air travel figures continue to grow as forecast, the emissions avoided through the use of synthetic fuels will quickly be outweighed by the added emissions from increased air travel. And it is pretty much common sense by now that emissions from air travel must sink dramatically.

Why another study is needed:

You might be thinking to yourself: "Why do we need another study on an air travel tax? Wasn't one even published just a couple of weeks ago?" It is true, there have been studies done on the question of taxing air travel before, the latest one by gfs-zürich on behalf of umverkehR, published in June. The disadvantage of these surveys, however, is that they are not able to capture the multidimensionality of a air travel tax. They do not show why someone is in favor of or opposed to such a tax. Furthermore, no insights are provided into the trade-offs an individual makes when deciding to approve/oppose the tax. As a consequence, political actors find themselves on a rather weak scientific foundation when attempting to draw up an air travel tax policy. This is where the Conjoint Analysis method comes into play.

In a Conjoint Analysis, participants are repeatedly presented with two randomly generated air travel tax policies. Here, the so-called "attributes" and "levels" play a central role. Attributes are characteristics of a tax, such as "tax rate short-haul flight", "tax rate long-haul flight", "use of earnings" etc. The levels are the values that an attribute can take on. For the attribute "tax rate short-haul flight", the levels could be "CHF 5", "CHF 30", "CHF 60" or "CHF 90". Also, the levels do not have to be numeric, as the attribute "use of earnings" shows: Here, levels such as "redistribution to population", "investments in climate projects" or "investments in railway network" are thinkable.
Based on the attributes and levels, hypothetical versions of an air travel tax are generated, i.e., for each attribute a level is randomly selected. Then, the two randomly generated versions are displayed side-by-side. At this point, the participant must decide which of the two versions he/she prefers (see example in table below). This choice task is repeated multiple times, each time with two newly generated versions.
In the end, through statistical analysis, we can identify which of the attributes (and its levels) were important to the participant, and which attributes were ascribed little to no importance. For instance, it seems likey that a higher level in the attribute "tax rate short-haul flight" will decrease acceptance of a tax, all else being equal. At the same time, it might well be that a majority of the pariticipants does not care about the attribute "use of earnings", i.e., their acceptance/opposition does not change when changing from "redistribution to population" to "investment in railway network", all else being equal. All this can be identified thanks to the Conjoint Analysis method.
This is where the added value lies compared to "traditional" surveys: With the help of these findings, political actors working on an air travel tax policy in the future will understand, with regard to which attributes special caution is recommended - and for which attributes they enjoy discretion. 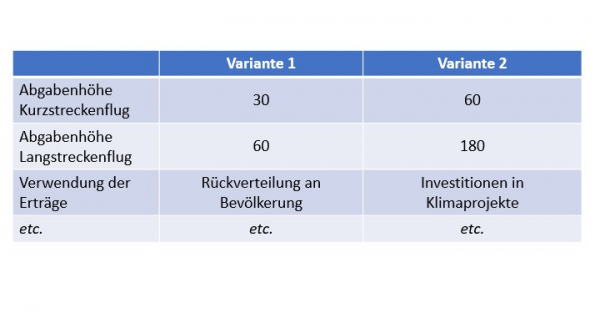 I am a student of International Relations at the University of St. Gallen and currently writing my master's thesis. Though some believe that the endeavour is too ambitious for a master's thesis, my aim is to make a valuable contribution to the discussions surrounding the introduction of an air travel tax in Switzerland. It is an essential discussion, as emissions from air travel simply must decrease sharply if we are to reduce our greenhouse emissions sufficiently.